Here’s my next entry for Lasang Pinoy – Street Food.
“Ok, dear Pinoy food bloggers, blog about your favorite streetfood – it may be something you ate outside school when you were young, or maybe even streetfood forbidden you as a kid. It may be your favorite snack while on the road, driving around the metropolis or on the way to the provinces during holidays. Or maybe the streetfood you eat during merienda (morning or afternoon snacks), or on the way home from the daily grind.”

This weekend, I drove up to Vegas for Ate Gigi’s house warming. My dad ordered this yummy spread from his favorite Filipino restaurant. The priest from Christ the King dropped by about 15 minutes before our scheduled blessing. Apparently, he’s running late for another house blessing – so he did us first. He sprinkled holy water everywhere – on the dog, the TV, the couch, the food, the kitchen, everything. Father Jerry couldn’t join us for food – but he wanted to sample a little bit of everything. He wanted to try the lumpia. We put a take-away plate together with these addictive rolls, pansit, bbq and rice.

Lumpia is the easiest food to introduce people to Filipino cuisine. I remember having school and skating friends over for meals at my old house in Diamond Bar. These fried egg rolls were a hit with just about everybody.

According to my dad, my mom has a decent recipe for lumpia. However, it’s for them easier to buy frozen lumpia from Green Hills and fry it up for company. I prefer the pork-filled lumpia over the vegetable offerings. The veggie lumpia has too much of a vinegar bite for my palate.

END_OF_DOCUMENT_TOKEN_TO_BE_REPLACED

So…I have this blog entry dedicated to Filipino food in honor of Sen. Benigno Ninoy Aquino, Jr. Stefoodie.net came up with the idea and e-mailed me to join in on the blogging event. I’ll give it a shot…. 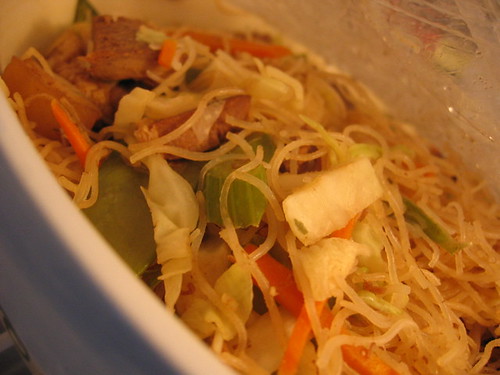 My parents worked full-time. They needed to put together simple and straight-forward meals. They were both skilled at whipping together some pancit and whatever happened to be in the fridge – celery, carrots, pork, shrimp, whatever. I grew up in America. I was surprised that pancit would pretty much taste the same, on either side of the Pacific. Or maybe my family in the Philippines had access to the ingredients as we did in the States.

OK – I can barely remember 1983. But I do remember when Ninoy’s wife, Corazon Aquino, ran against Marcos. She ran in 1986 and became the first female president of the country. Over dinners of pancit, fish and rice, my parents talked about People Power. I remember how excited they sounded about the protestors taking the streets, clad in yellow and chanting against the dictatorship of Marcos. In 1983 – sadness at Ninoy’s murder. In 1986 – hope.

There was a girl in my elementary school who was one of Marcos’ granddaughters. On the playground, I remember asking her what she thought about the revolution that was going on the PI. “They’re not going to elect a housewife to run the country,” she informed me snidely. Well…the Filipino people proved her wrong. She didn’t talk to me after the elections. Not for a while, at least.

It is true you cannot eat freedom and you cannot power machinery with democracy. But then neither can political prisoners turn on the light in the cells of a dictatorship. – Corazon Aquino

And this site has a decent recipe for pancit. This first time I tried making the noodles, I made the mistake of using water. Don’t do that. Just let the heat steam up the dry noodles – that’s going to be enough to loosen them up. Then fry the loose noodles with the veggies. Good stuff.